To share your memory on the wall of Jean Ayers, sign in using one of the following options:

Florence, known by all as Jean, had many interests in life. She was a homemaker and excelled as a seamstress making tailored suits and clothing for the family. She dabbled in most every type of fiber craft but knitting was her favorite evening pastime. After her husband passed away, in 1992, she found new friends and activities to keep her busy. During the day, you would find her either at the Clawson Senior Center or the Royal Oak Senior Center playing bridge or shooting pool and, yes, she carried her own pool cue with her. At the age of 72, she received her first computer and taught herself how to play computer games, record her finances and transfer photos from her camera to create documented photo histories of the winners of the monthly pool challenge. At the age of 88, she was diagnosed with Alzheimer’s and moved to Olney, Maryland to live with her daughter. She adapted to her changing abilities and new environment. She played bridge at the Rockville Senior Center and special thank you to all the players that helped her along the way. She picked up knitting again and made baby blankets for charity. She learned how to use an iPad to play her favorite game: Sudoku. Jean was a quiet and private person, generous and kind to others. She was a strong woman with a fierce will to live and fought to the very end against the Alzheimer’s that eventually took her from us.

Per her wishes, there will be no services. Her cremains will be returned to her home in Michigan where she will be laid to rest with her husband, Donald Jean Ayers, in White Chapel Cemetery, Troy Michigan.

Memorial contributions may be made in (her/his) honor at either of their favored charities by clicking the links below.
Read Less

Receive notifications about information and event scheduling for Jean Ayers

You will receive any future notification messages.
No funeral details available.

We encourage you to share your most beloved memories of Jean Ayers here, so that the family and other loved ones can always see it. You can upload cherished photographs, or share your favorite stories, and can even comment on those shared by others.

Posted Aug 08, 2020 at 01:12pm
I am Ron , one of your moms bridge buddies. So sorry to learn of her passing. She was so sweet, kind and fun to spend time with. Loved her style of playing. She was blessed to have a caring daughter and son in law. May she Rest In Peace. My best Ron Rubbin.

Posted Aug 07, 2020 at 02:22pm
I knew Jean through the Rockville Senior Center, Drop in Bridge Group. She was, shall we say, an unconventional bidder so you never were quite sure how to bid when playing with her but it was a load of fun. She may not have remembered "the rules" but she had an innate sense of bridge and how to play. Jean, it was a pleasure to know you, to play with and against you. Play lots of bridge and I think now you just may have the points to bid 4S.
Comment Share
Share via:
MB

Posted Aug 06, 2020 at 11:25am
It was my great privilege and pleasure to be Jean’s health aide for 3+ years, while she was living with Susan and Lee. She was remarkably patient with me as I helped her with her shower; she put up with every crazy way I rolled her hair and never criticized the job I had done. I loved the sparkle in her eyes when I asked if she wanted to play Skip-Bo, her favorite card game of late. She had her own way of playing, and when it seemed like she’d missed a good play, she wound up winning more often than not.
When I first started working with her, she was walking laps around the house daily and going out for bridge at the Senior Center twice a week. She kept meticulous records of her meds and took her temp every day. She was a great sport and cooperated with every exercise regimen she was given.
On a few occasions, I stayed overnight while Susan and Lee were away, and I loved watching the old shows Jean liked—from Roy Rogers, Andy Griffith, and Perry Mason to Murder, She Wrote and Hart to Hart. I marveled at so many things about her—her sense of humor, her skill at jig-saw puzzles, Sudoko, and a difficult game on her IPad called Flow.
She loved Susan and Lee so much, and I know she appreciated everything they did to make her life comfortable and enjoyable. I am grateful to them all for having made my life richer.
Comment Share
Share via:
LB

Posted Aug 04, 2020 at 08:59pm
I played with Jean at the Rockville Senior Center. Jean was a very gracious and kindhearted lady. In fact, she was a Grand Lady. I loved playing bridge with her. It could be frustrating because she never knew how many points she had or explain the way she bid. But it was always fun. And, once she won the bid and had to play the hand, boy could she play. I would purposefully be her partner. I always loved her bid retort and use it myself in her honor,”You don’t mind if we go down, do you?” Rest In Peace Jean. You are and will continue to be missed in the RSC bridge group.
Comment Share
Share via:
NK

Posted Aug 03, 2020 at 06:39pm
I had the privilege of being one of Jean's Companions. Jean was a delight to be around she loved to play cards, eat ice cream, and watch her favorite old time TV shows. I enjoyed visiting her, it was never a chore always a delight ! Some of our best times were exercise time. Not her favorite. Since I have a sense of humor I new if I could get her to laugh then it was a home run. And laugh we did! I put fast swing music on and start dancing/exercising she'd laugh so hard she would enter in and exercise from her chair and we'd have a great time. Casper the cat loved Jean so much. He'd sit in her chair, on her bed, wherever Jean was Casper could be found. Jean loved cats. Jean was so kind and thoughtful always wanted to make sure I had a coke or Pepsi to drink or shared her treats with me when playing cards. I felt like home whenever I would go and be with her. Susan took such great care of Jean everything was decorated for every Holiday. Jean always helped from her chair putting up decorations on the Christmas Tree, or Easter eggs , you name the Holiday and there was a decoration Jean assisted Susan with. Susan always made that possible. I remember driving Jean to the Senior Center a few times so she could play bridge with her friends. She amazed me with the amount of get up and go she had. I'm glad I had the opportunity to know such a gem.
Nancy Kellogg
Comment Share
Share via: 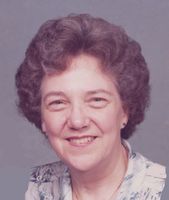 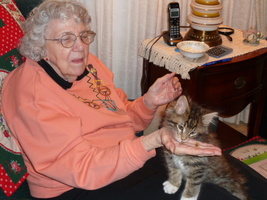 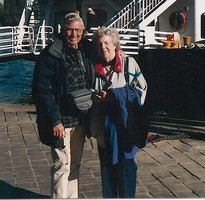 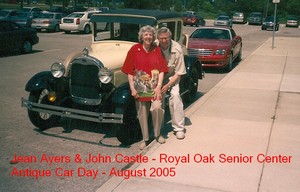